Antonov An-26
South West Aviation
Departure airport: Juba Airport (JUB/HSSJ), South Sudan
Destination airport: Wau Airport (WUU/HSWW), South Sudan
An Antonov cargo plane was destroyed when it crashed shortly after takeoff from Juba Airport, South Sudan. A post-impact fire broke out.
Eyewitnesses at the scene report that one person survived the crash and that at least four occupants have died.

South West Aviation freight services from key locations such as Kenya, Uganda, Ethiopia,Djibouti and Dubai to Juba South Sudan and other part of the world.

Several people have been feared dead after a cargo plane crashed in South Sudan shortly after taking off from the airport in the country’s capital, authorities said.

Kur kuol, the director of Juba International Airport, told Anadolu Agency that eight people were on board the plane that belongs to South West Aviation and was heading to the Northern Bahr el Ghazal state.

A South West Aviation Antonov AN-26 freighter, charter flight from Juba to Aweil (South Sudan) with 8 people on board, lost height shortly after departure from Juba at 08:30L (05:30Z) and impacted a farm near Hai Referendum (surbub of Juba) about 3nm southwest of the airport and abeam of the runway. There are reports of one survivor in critical condition, 5 bodies were recovered, the other occupants are feared dead.

The aircraft was to carry a load of money for wages to Aweil.

The airport reported the aircraft belonging to South West Aviation was bound for Aweil with 8 people on board.

According to the website of South West Aviation, based in Juba (South Sudan), the airline operates one AN-26 registration YI-AZR. That tailnumber is unknown in databases. A local radio station has a good number of photos of YI-AZR while being loaded with solar panels and mounting assemblies at an unknown date in the past. 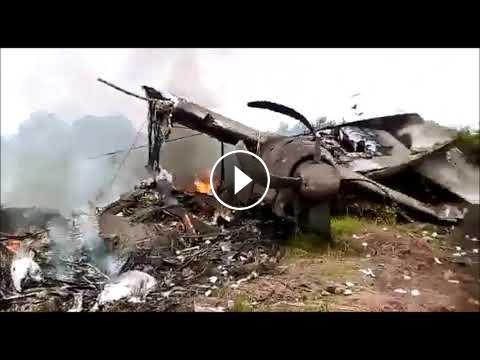