The international force that monitors the Israeli-Egyptian peace agreement said Thursday that eight peacekeepers, including six Americans, were killed when one of its helicopters crashed during a routine mission in Egypt's Sinai Peninsula. A ninth peacekeeper was badly injured.
The Multinational Force and Observers said a French peacekeeper and Czech member of the force were also killed. It did not release the names of the dead, pending notification of their families. It said the injured peacekeeper was American.
The MFO said the helicopter crashed during a routine mission near Sharm El-Sheikh, a popular Egyptian resort city on the Red Sea, and that an investigation was underway. It did not give a precise location of the crash or say whether the helicopter fell on land or crashed into the sea.
An Egyptian official speaking on condition of anonymity per regulations, said the helicopter crashed over Red Sea waters outside Egyptian territorial boundaries.
Extremist groups and a regional affiliate of Daesh are known to be active in Sinai. But the MFO said there were no signs of an attack. “At this point, there is no information to indicate the crash was anything except an accident,” it said.
An Israeli official said the injured peacekeeper was airlifted by the peacekeeping force to the Israeli border city of Eilat. From there, he was flown to an Israeli hospital. The official spoke on condition of anonymity because he was not authorized to discuss the matter.
The Czech Republic’s military confirmed one of the fatalities of the Black Hawk’s crash was a Czech. It said the cause of the crash was a technical malfunction and added that the survivor is in critical condition.The chief of Czech army’s general staff, Gen. Ales Opata, expressed his condolences and identified the victim in a Facebook post as Sgt. Maj. Michaela Ticha.
The MFO monitors the four-decade-old peace agreement between Israel and Egypt. Thirteen countries contribute troops to the MFO, with the United States making up the largest contingent. Its responsibilities include monitoring troop levels along the border and ensuring the freedom of navigation through the Strait of Tiran. 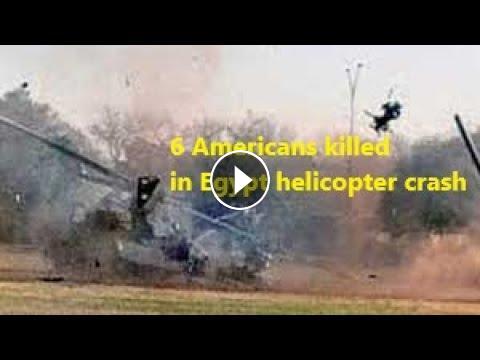 The international force that monitors the Israeli-Egyptian peace agreement said Thursday that eight peacekeepers, including six Americans, were killed...