(27 Dec 2020) President Faustin-Archange Touadéra of the Central African Republica cast his ballot in elections on Sunday, after a campaign marked by violence between government forces and rebels.
Touadéra, who is seeking a second term in office, arrived to vote at the Lycée Boganda heavily escorted by security forces, including UN peacekeepers.
"There is a constitution, we are a democratic state. The constitution allows every five years for the Central African Republic people to freely choose their leaders", he said after casting his vote.
Despite calls from the opposition to delay the vote amid the insecurity, the Constitutional Court rejected a postponement.
Touadéra has tried to reassure candidates and voters that the voting will be secure.
This is the country's first election since a peace deal was signed between the government and 14 rebel groups in February 2019, although fighting continues.
The government blames the unrest on former President Francois Bozize, who returned from exile a year ago and has been blocked from running in the election.
He has been accused of joining up with armed groups to launch a coup. He has denied this.
Sixteen candidates are running for president, and more than 1,500 candidates are running for 140 seats in the national assembly. 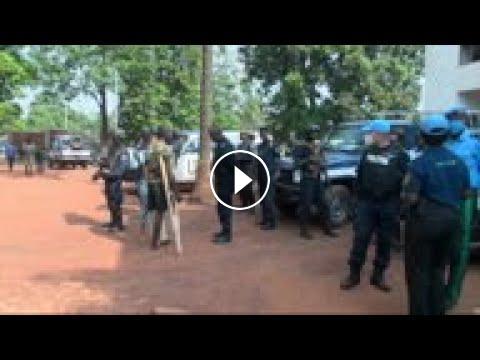 (27 Dec 2020) President Faustin-Archange Touadéra of the Central African Republica cast his ballot in elections on Sunday, after a campaign marked by ...