Almost 15,000 Ethiopians who fled violence in the Tigray region, are waiting in a temporary Sudanese camp for transit to an official refugee site.
At Village 8 transit camp, people queued to sign up for convoys of buses going to Umm Rakouba refugee camp, the first official refugee camp to deal with the refugee crisis.
Almost 50,000 Ethiopians fled to Sudan in the last month escaping violence between the Ethiopian government and the Tigray People's Liberation Movement (TPLF).
They fled through two main crossings: Hamdayet and Ludgi but the Sudanese government wants to move all of them inwards towards Umm Rakouba camp.
"These refugees when they entered, they were supposed to stay according to the law, 48-72 hours. Now the time was extended to a month because it was an emergency situation until they set up the camps that they were supposed to go to in Tenebe and Umm Rakouba," says Mustafa Anwar Mohammed, Head of Village 8 camp.
He says that convoys of buses will start moving the refugees from Village 8 - a process that could take weeks.
Village 8 was compensation for Sudanese people in the village of Hashaba for being displaced for a hydroelectric dam that displaced them.
That housing is now being used for the refugees.
Mohammed says the Sudanese people want their housing back.
But many refugees don't want to leave Village 8 because it has better facilities including cement housing.
"Umm Rakouba, they told us its a desert, there is no water. There is a lot there that scares me," says Rahwa Garmla from Himora.
She has been in the camp for the last three weeks with her two young children.
For others, proximity to the border is key.
They want to be able to be there for their displaced families.
Haile Gebremikeal lost his wife and kids.
"If we can stay here for 1 or 2 months, if they gave us a chance we can look out for our family or our family can look out for us," he said. 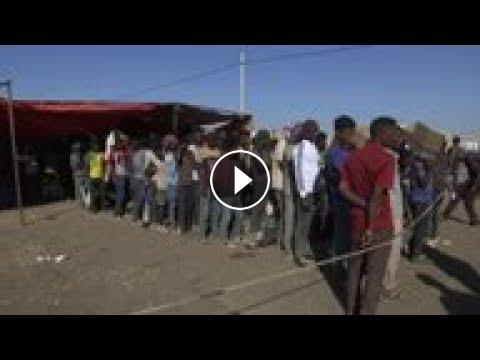 Almost 15,000 Ethiopians who fled violence in the Tigray region, are waiting in a temporary Sudanese camp for transit to an official refugee site. At ...