A barrister is calling for a UN led inquiry into alleged human rights abuses in Egypt.
It comes after a meeting in Switzerland to review the country's record for the first time since the 2011 ouster of long-time autocrat Hosni Mubarak.

The United States and other countries who were at today's UN Human Rights Council meeting, have slammed the human rights situation in Egypt.
The blistering criticism came as human rights groups say that conditions in Egypt have worsened in recent years, rather than improved and warned that their work to highlight abuses is becoming increasingly difficult.
But the Egyptian government has usually brushed off criticism, adding that it has been abiding by law or is in the throes of a violent wave of militant attacks that require a tough security policy.
The review has garnered considerable interest because of successive reports of widespread abuse in Egypt - one of the most infamous being the Rabaa "massacre" that took place on 14th August 2013 in Cairo when police opened fire on anti-government demonstrators.
The Islamists, who had been camped out for weeks in a government square, had been protesting against the removal of President Mohammed Morsi by the Egyptian military.
But it became the scene of the biggest "massacre" in modern Egyptian history, when more than six hundred people were killed during 12 hours of mayhem in Cairo's Rabaah el-Adawiyah Square - as Egyptian security forces first fired tear gas, before turning to bullets.
Human rights groups say the total could be much higher.
Ahmed Bedier has been in Geneva today.
He says he was at Rabaa - and that this his brother was killed during the security offensive.
"What I saw there was horrific, it was like a war zone, I went to the masjid (mosque) Al-Iman in Nasr City where I counted at least 350 bodies, 90 percent of them were executed because they had a single bullet to their head or the neck or the chest. I saw this with my own eyes, I took the pictures, this is not something someone else told me, I saw this," Bedier tells journalists.
"There hasn't been a single investigation, there hasn't been a single arrest, and there hasn't been a single prosecution. A massacre of that size."
Egyptian law allows police to use weapons to disperse assemblies that "present a danger to public security."
Rights groups, however, say the issue is in proportionality, and courts tend to give wide leeway to police.
America's criticism echoes that of many other countries, including Britain, Sweden, Germany, Turkey, Brazil, the Netherlands and Norway, who have pointed to Egypt's crackdown journalists and human rights groups that has included raids on Egyptian and foreign backed organisations.
They also criticised the harsh sentences - including hundreds of death sentences - handed out against government critics, who are routinely branded as traitors and spies.
But Hesham Badr, deputy foreign minister of Egypt, told the session today that some of the comments by delegations were based on "misconceptions," lauding his government's efforts at legal and constitutional reforms and commitment to international obligations.
The Universal Periodical Review (UPR) - which reviews the human rights records of all UN Members States - is a flawed way of doing business, says Cadman.
"There has been a great deal of criticism as to the effectiveness of the Universal Periodical Review, and there is of course criticism that Egypt has used this opportunity to ensure that some of its strategic partners supports it in front of the council," says Toby Cadman, a barrister who represents various families who have been victims of government repression.
He says there needs to be a larger inquiry - with more weight behind it. 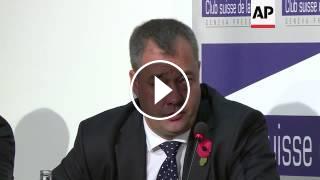 A barrister is calling for a UN led inquiry into alleged human rights abuses in Egypt. It comes after a meeting in Switzerland to review the country's...