Zimbabwean aviation officials misinformed news organisations on Thursday that a Boeing 767, arriving from London, was involved in an accident at Harare's airport, then told journalists rushing to the scene it was only a drill.
David Chawota, head of the Zimbabwe Civil Aviation Authority, said the information was given out to make the drill realistic.
Soldiers, paramilitary police and security agents sealed off approaches to the airport and guarded the perimeter.
Military helicopters hovered overhead as smoke rose from one runway.
Reporters were not allowed close enough to see the site of the reported accident.
At Harare's Parirenyatwa hospital, extra doctors and nurses were on hand and told patients in line at the emergency room that they were expecting casualties from the main airport.
The atmosphere at the hospital was tense as staff evidently believed it was a genuine emergency, witnesses said.
Emergency hospital facilities in Zimbabwe have suffered acute shortages of equipment and drugs in the nation's economic meltdown, making them ill-equipped to handle bus crashes and road accidents.
It's not the first time aviation officials in Africa have staged an elaborate drill which involved the media.
In 2006, Kenyan officials told journalists that a passenger plane had crashed near a Nairobi airport with 80 people on board - but when reporters arrived, they found it had only been a practice drill. 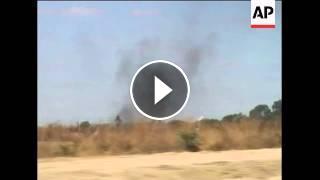 Zimbabwean aviation officials misinformed news organisations on Thursday that a Boeing 767, arriving from London, was involved in an accident at Harar...