Madagascar's President Marc Ravalomanana cast his vote in Sunday's presidential elections which got under way despite ballot papers for four candidates not being delivered to polling stations.
However, there were no signs of the violence that split this Indian Ocean island nation between two governments after the last presidential elections five years ago.
Ravalomanana, who was expected to beat 13 contenders, attended a church service before going to a polling station near his house in the capital, Antananarivo.
He urged all Malagasy people to go and vote.
When reporters asked Ravalomanana if he expected any violence, he replied emphatically no.
"I am very very proud because it is a challenge for us, for Madagascar, to organise free and democratic elections," he added.
Ravalomanana, a charismatic dairy tycoon known as "the Milkman," expressed confidence in his success in the race in which he needs to win at least 50 percent of the vote to avoid a runoff.
There were some concerns about Madagascar's peculiar electoral system, under which candidates must print their own ballot sheets.
The government, for the first time, has taken responsibility for delivering ballots to polling stations.
The president of the election observation organisation said ballot papers for four candidates had not been delivered to polling stations across the country.
Asked about the papers, Ravalomanana said that it was not his problem.
The four candidates are not considered serious contenders but recently, the Washington-based National Democratic Institute for International Affairs criticised the system, saying it favours richer candidates and is vulnerable to fraud.
It recommended changing the system before the next elections in 2011.
Many hope there won't be a repeat of the fighting that followed the December 2001 elections, when former President Didier Ratsiraka refused to accept defeat.
After months of rival governments in two capitals and low level fighting between their loyalists, Ratsiraka fled to France in June 2002.
The elections got off to a slow start with small lines outside polling stations at the 7 am (0400GMT) start of voting.
However, voting was expected to pick up in the afternoon.
About seven million (m) voters are registered to take part in the elections which are being overseen by more than 14,000 observers, both Malagasy and foreign.
Polls close at 6 pm (1500GMT) and some preliminary results may be available by the end of the day although no official count is expected for two weeks. 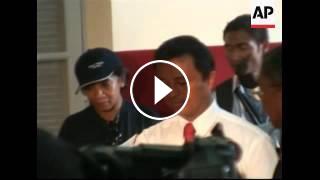 Madagascar's President Marc Ravalomanana cast his vote in Sunday's presidential elections which got under way despite ballot papers for four candidate...