French President Francois Hollande met with the Interim President of the troubled Central African Republic (CAR) on Tuesday at the Elysee Palace.
France has sent 1,600 troops to its former colony to bolster nearly 6,000 peacekeepers from African nations who are working to stabilise the country, which has been in chaos since a March 2013 coup.
After talks with Samba-Panza, Hollande told reporters that the situation in the Central African Republic has since got worse.
"What's deteriorated, got worse, is the security situation in a certain number of places," Hollande said.
Central African Republic, long one of the world's poorest and most unstable countries, descended into chaos one year ago when an alliance of mostly Muslim rebel groups in the country's north overthrew Francois Bozize, the president of a decade.
The rule of the Muslim rebel coalition known as Seleka was marked by atrocities.
Samba-Panza, the nation's first female leader, was sworn-in in January after Michel Djotodia, the rebel leader behind the March 2013 coup, stepped aside under mounting international criticism of his inability to control his fighters and stem the violence.
Since then, the country's Muslim minority population has been targeted in often brutal retaliatory violence at the hands of a Christian militia known as the anti-Balaka.
More than 1,000 people have been killed since sectarian fighting erupted in early December and nearly 1 (m) million in this country of 4.6 (m) million have fled their homes.
Hollande said a European mission for CAR "essentially about transport, sanitary and logistical aid" would be made official on Wednesday. 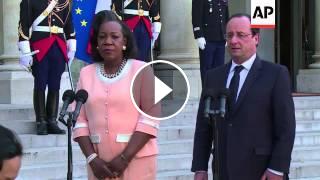 French President Francois Hollande met with the Interim President of the troubled Central African Republic (CAR) on Tuesday at the Elysee Palace. Fran...