Moroccan activists and journalists protested in Rabat on Wednesday for the release of a journalist sentenced to prison for undergoing an abortion while single, warning that the conviction threatens women's rights.
Hajar Raissouni, 28, was convicted Monday in a case that gained national and international attention.
Abortions are illegal in Morocco as is premarital sex, but she denied ending a pregnancy and said she was married to her Sudanese fiancé under Islamic law.
Dozens of prominent activists, journalists and other demonstrators gathered peacefully in front of parliament in Rabat, holding signs and chanting slogans denouncing the verdict.
Supporters say Raissouni was targeted for her reporting work.
Protester Abdullah Aid accused the authorities for using Raissouni's case for political purposes.
"Individual freedoms in Morocco are a red line and we have to defend them no matter what," he added.
Meanwhile, another protester Myriam Saya said Raissouni is "the symbol of the injustice in Morocco."
Raissouni's fiancé and the doctor accused of terminating the pregnancy were also convicted.
The doctor's colleagues and family were at the protest, as a small group of police looked on. 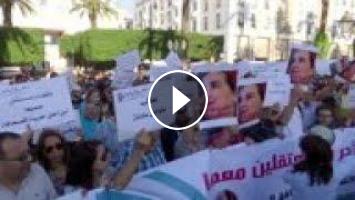 Moroccan activists and journalists protested in Rabat on Wednesday for the release of a journalist sentenced to prison for undergoing an abortion whil...