The Federal Ministry of Health is at the heart of Sudan's anti-Ebola action plan.
The ministry says the north African nation is free from the disease, which has claimed the lives of more than five-thousand people in West Africa.
Nonetheless, health official Dr. Tilal al-Fadil al-Mahdi says they're taking no chances.
"After the disease appeared in several countries and was declared a global epidemic by the WHO and a threat to all nations, the state responded directly by setting up a high-level committee overseen by the federal minister of health," he says.
"The committee members include the civil aviation authority, the various regular forces and those working in this field."
Al-Mahdi says the group meets every week to discuss any developments.
Dr. Hamza Awadallah, who is a member of Sudan Doctors' Union, thinks there is a risk of the virus reaching Sudan by land, but doesn't think it's likely to be brought in by people travelling by plane or boat.
"In terms of airports and main sea ports there will not be a problem because anyone arriving from West Africa will be stopped and examined," says Awadallah.
As Sudanese officials continue to work on their Ebola readiness, the EU has said today that it's boosting its Ebola aid - an announcement that follows a visit by two commissioners to West Africa.
Brussels says they're making an additional 29 million euros (36 million US dollars) available to help fight the outbreak and provide assistance to neighbours of affected countries.
This coincides with the release of a charity song in London to raise funds to help ease the crisis.
The recording is a new version of the Band Aid charity single "Do They Know It's Christmas?" - which was first recorded 30 years ago to raise funds for famine relief in Ethiopia - and features artists such as One Direction, Bono and Ellie Goulding.
The UN health agency says that overall 14,098 people are believed to have been infected with Ebola, the vast majority of those in the West African countries of Guinea, Liberia and Sierra Leone. Of those, 5,160 have died.
There are some signs that the rate of new infections may be slowing in Guinea and Liberia, but they are surging in Sierra Leone, it says. 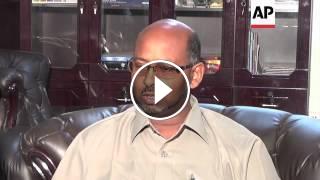 The Federal Ministry of Health is at the heart of Sudan's anti-Ebola action plan. The ministry says the north African nation is free from the disease,...