Bugoma is a tropical rainforest gazetted for protection by the Ugandan government in 1932. It is home to 600 chimpanzees, endangered bird species, such as the Nahan’s francolin and the African grey parrot, and Ugandan mangabeys, which are native to Uganda. The biodiverse ecosystem also serves as a catchment area for the Albertine region, one of the most ecologically rich regions in Africa.

“What I know is that the land does not belong to the Bunyoro Kingdom. It is not part of the restituted properties,” said Jackson Wabyona, a civil society activist. “Where did the king get this land from?"

As the charcoal burners convert the big trees into charcoal, bulldozers from Hoima Sugar are advancing to convert the landscape into an expansive sugarcane plantation without a legally required Environmental and Social Impact Assessment. This is was contrary to the briefing of Beatrice Anywar who told the European-Union delegation that all activities including Hoima Sugar Limited had been stopped pending re-survey of the boundaries of Bugoma.

“Cabinet has stopped all activities of Hoima Sugar and the government is going to resurvey the boundaries of Bugoma,” said Anywar. Anywar was speaking on November 2, 2020 to the European Union delegation which included 8 ambassadors from different countries in the EU.

“It does not make good sense to grow sugarcane in Bugoma,” said Attilio Pacifici, EU Head of delegation, adding that climate change is real and Bugoma helps out as a carbon sink for waste gases. The re-survey of the boundaries has been put off until after the Presidential elections slated for January 14, 2020. 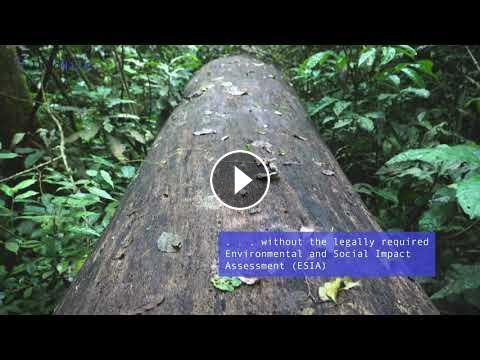 Bugoma is a tropical rainforest gazetted for protection by the Ugandan government in 1932. It is home to 600 chimpanzees, endangered bird species, suc...