How do you get more people to watch your documentary? Give it a teasing title, clearly intended to grab floating viewers by piquing their interest. Gosh, where could it be, the world's worst place to be gay? Afghanistan? China? North Korea? Tunbridge Wells?

It turns out to be Uganda, at least according to the Radio 1 DJ Scott Mills, who is himself gay. He went to Kampala and indeed found plenty of depressing evidence of institutionalized homophobia, and this was before the murder last month of the Ugandan gay-rights activist David Kato.

Africa generally is becoming a dangerous place to be openly gay – no fewer than 37 African countries have declared homosexuality illegal – but Uganda is evidently the most dangerous, with a prominent politician called David Bahati championing legislation – bluntly called the Anti-Homosexuality Act – which would introduce life imprisonment for people found guilty of same-gender sex, and the death penalty for serial offenders.

If only this represented the ranting of a right-wing zealot, out of step with public opinion. In fact, Mills found perfectly bright schoolchildren who are likewise of the view that homosexuality is an abomination, and met a newspaper editor who insisted that it reduces the human lifespan by 24 years. A young lesbian told him that she had been raped in an attempt to cure her of her orientation, yet far from curing her, the rape left her pregnant and HIV-infected.

All this is a relatively recent phenomenon, apparently visited upon Africa by the growing influence there of American evangelists. And where angry shouting doesn't work, glib humour is deployed. In the beginning it was Adam and Eve, not Adam and Steve, offered a panellist on a phone-in radio show. 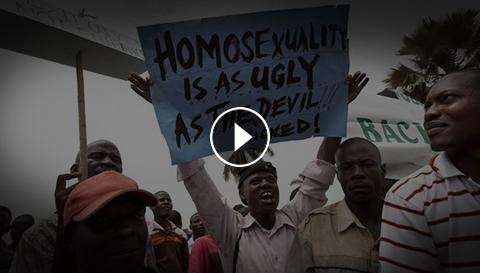 How do you get more people to watch your documentary? Give it a teasing title, clearly intended to grab floating viewers by piquing their interest. Go...