More than 150,000 people have fled Burundi in recent weeks, and many are staying just over the border in Rwanda.

Presently, more than 14,000 refugees are living in Bugesera Refugee Camp, one of the biggest camps in Rwanda. Conditions can be desperate, but few plan to go home anytime soon.

Bugesera is now the second largest refugee camp for Burundian refugees in Rwanda. In the run-up to the elections, they were receiving hundreds daily. But, since Tuesday's polls, arrivals have been dwindling. Officials don't believe that's by choice.

"According to what they [the people coming in] are saying, the borders are closed. So, many of [the] militia are watching, and they are forcing people to stay in the country,” said Azarie Karangwa, manager of Bugesera Refugee Camp.

Tens of thousands of Burundians have passed through the camp since the troubles broke out in April. Eighteen-year-old Erice Ndizeye has been there two weeks and is too scared to return home.

"I was forced to come here. The Imbonerakure youth came and took me from my home and beat me many times. I realized they meant to kill me. They chased me all the way here to the border,” he said.

When asked about the just-concluded elections, Ndizeye said that Nkurunziza is not the right candidate, as so many people have been killed because of him. He said he wouldn’t vote for Nkurunziza and that he wanted him to go "so we can choose from other people."

Uwimana Francois spent election day making his way to Bugesera, eager to be reunited with family members who had already fled to Rwanda.

"I left because I feared for my safety. I left without my mother, who is still in Burundi. But, I had to come find my family," he said.

Refugees at the camp typically stay two weeks before being transferred to better facilities at Camp Mahama about four hours from the capital, Kigali. But, Camp Mahama currently has a shortage of water, so refugees at Bugesera are stuck for the time being.

Manager Karangwa said the camp is running smoothly for now.

"The situation is under control. We have shelters, we have food, we are feeding them. We have enough water. We have sanitation. We have a clinic. When someone is sick, we have [the] possibility to treat him," he said.

Officially, Rwanda has the capacity to host 50,000 refugees. But now, it's sheltering over 70,000. And, the numbers coming over the border from Burundi are expected to increase in the coming weeks.
More on: http://newscontent.cctv.com/NewJsp/news.jsp?fileId=307388 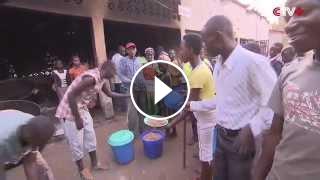 More than 150,000 people have fled Burundi in recent weeks, and many are staying just over the border in Rwanda. Presently, more than 14,000 refugees ...