(24 Aug 2020) Hundreds of people took to the streets of the Libyan capital Tripoli on Sunday, in protest against corruption and poor living conditions in areas controlled by the U.N.-supported government.
A group of protesters attempted to storm the Cabinet but were pushed back by security forces guarding the building who fired unspecified munitions to disperse the protest, according to a Tripoli resident who took part in the march.
The protester, who spoke on condition of anonymity for fear of reprisal, said there were an unknown number of causalities.
The Interior Ministry in Tripoli accused "outlawed infiltrators" of firing at the protesters and said an investigation was opened.
The chaos in Libya has worsened in recent months as foreign backers increasingly intervene, despite pledges to the contrary at a high-profile peace summit in Berlin earlier this year.
Libya was plunged into chaos when a NATO-backed uprising in 2011 toppled longtime dictator Moammar Gadhafi, who was later killed.
The country later split between rival east- and west-based administrations, each backed by armed groups and foreign governments. 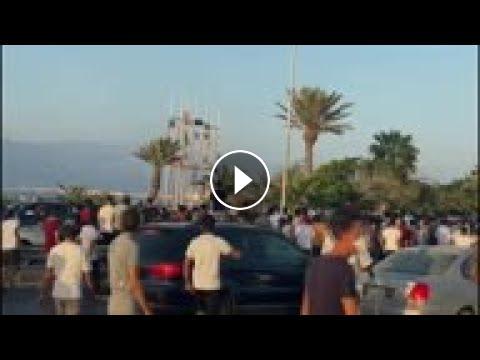 (24 Aug 2020) Hundreds of people took to the streets of the Libyan capital Tripoli on Sunday, in protest against corruption and poor living conditions...