The United Nations is appealing for more financial help to meet the needs of thousands of refugees fleeing the fighting in South Sudan.
Just over the border in Sudan, more than 50,000 people are now living in makeshift camps at four sites in White Nile state.

Al Alagaya is just one of many camps in Sudan housing refugees who've fled insecurity and violence in South Sudan.
Many here have lost their homes, their livelihoods and their loved ones.
Since the outbreak of violence in South Sudan in mid-December last year, more than 100,000 refugees have crossed the border into Sudan. Nearly 1,000 new refugees are arriving every week.
The United Nations High Commissioner for Refugees, Antonio Guterres, was among a delegation who recently visited Al Alagaya camp, in Sudan's White Nile state, along with the UN Secretary General's Humanitarian Envoy, Dr Abdullah al Matouq.
Al Matouq says the challenges are immense.
"I wish that my words would reach the presidents and the heads of major organisations to help our brothers in Sudan. They have a huge problem with the refugees from South Sudan who are escaping death. If you could see what we see from their tragedies, your hearts would melt, they deserve a better life, unfortunately there is a lack of resources," he says.
Guterres meanwhile expressed his gratitude to the Sudanese government and people.
"When this tragic war erupted in South Sudan, Sudan not only opened their borders, but the truth is that the Sudanese opened the doors of their houses and opened their hearts, and received the South Sudanese as brothers and sisters," said Guterres.
The UN is concerned that as the conflict continues the number of people fleeing to Sudan will grow much higher.
It's launched an urgent appeal, calling on the international community to help provide emergency aid.
Michael John Cole is just one of many who now call Al Alagaya home. He says the conditions are good but some items are in short supply.
"We need medication and food for children, these things are essential for us right now," Cole says.
The growing number of refugees further compounds a deteriorating humanitarian situation across Sudan.
In Darfur alone, over 400,000 people have been displaced since the beginning of the year, placing significant strain on the delivery of humanitarian services.
The UN has called on South Sudan to silence the guns and immediately agree to a peace deal and return to the path of peace and stability.
According to the United Nations refugee agency (UNHCR), the numbers of refugees from South Sudan will likely reach 165,000 by the end of this year. 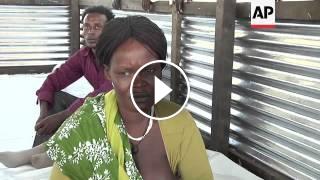 The United Nations is appealing for more financial help to meet the needs of thousands of refugees fleeing the fighting in South Sudan. Just over the ...