Members of the European Union visited Rabat on Tuesday, where they met with members of the government to talk about immigration and increase of cooperation between Morocco and the EU bloc.
Ylva Johansonn, European Union Commissioner for Home Affairs, told journalists that it was necessary to "dedramatise" the migration policy and have a different approach to a phenomenon that was not new.
"Migration is not something to be afraid of. Migration is here, has always been here, will always be here. Our task is to manage migration," she said.
The EU is concerned over the increase on people trying to enter to Europe through the Canary Islands - one of the deadliest routes for illegal immigration - Johansonn commented.
"I'm also here to listen to how they (Morocco government) see the challenges and what kind of help we can give (...) and how we can work close together"
Johansonn recognised that Morocco has done a good job in terms of immigration, but that it is also a country of transit and destination for people coming from other African nations.
Questioned by the journalists over allegations that Frontex, or the European Border and Coast Guard Agency, was involved in illegally preventing migrants or refugees from entering Europe.
Johansonn said "if it's true, it's totally unacceptable".
The Commissioner said she had requested an extraordinary meeting in the management board to clarify the facts.
"A European agency has to comply to EU law and fundamental rights with no excuse," she said.
EU lawmakers will demand Tuesday that Frontex Executive Director Fabrice Leggeri explain claims in a media investigation that the agency took part in pushing back migrants and refugees in the Aegean Sea between Turkey and Greece earlier this year.
Frontex launched an internal probe and Leggeri said in October that no evidence had been found to substantiate the allegations.
Frontex's managing board held emergency talks last month on the push back reports, but the European Commission has demanded the board meet again soon to address the issue. 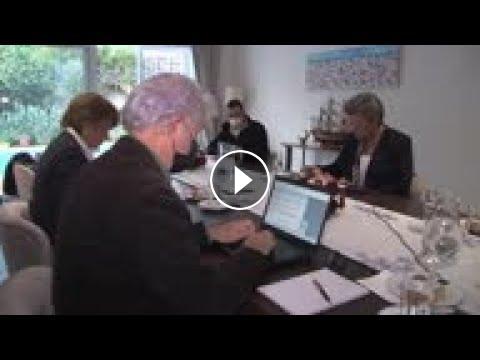 Members of the European Union visited Rabat on Tuesday, where they met with members of the government to talk about immigration and increase of cooper...