In Southern Africa, bordered by South Africa and Tanzania, and the channel that bears its name, we find Mozambique. The capital, Maputo, has a population of 1.3 million and it's its political, administrative and judicial center.

As happens in the majority of underdeveloped countries, the capital is overcrowded with immigrants from the country's interior, where the opportunities for work are very few.

In these capitals travelers will discover the contrast between the prosperous city of the ruling class, with better cars and houses in the best European style, and the population immersed in the most scandalous poverty. The poverty rate there is over 50% and life expectancy is around 50 years... one of the lowest on the continent.

Yet these figures do not take the AIDS epidemic into account. Despite its late arrival in Mozambique it's anticipated that the devastating effect of AIDS will cause a 10 year drop in the life expectancy. After suffering a bloody 15-year war, Mozambique is currently one of the world's 15 poorest countries.

The population of the country is 25 million of which the half live below the absolute poverty line... and 30% live in conditions of extreme poverty. Despite the fact the Mozambique has been disarming for the past 20 years and peace reigns, we can not anticipate that the situation will improve without international intervention to aid the country's development.

The lack of an economic infrastructure means that social instability is a latent factor particularly as a result of the natural disasters which can leave many families utterly destitute. The marks of war and hunger can be seen on each of Mozambique's streets. In the making of this film, the team has witnessed some truly heartbreaking scenes which are difficult to report without being affected by what you see... or becoming involved with the people.

Mutilations are a constant sight in every city of the country. Disease, extreme poverty, and the inhumane conditions under which the population lives, lacking even the most basic sanitation, make it necessary for developed countries to take immediate action on all fronts bringing an aid to provide some relief for these people. 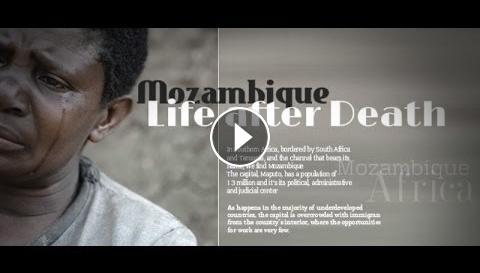 In Southern Africa, bordered by South Africa and Tanzania, and the channel that bears its name, we find Mozambique. The capital, Maputo, has a populat...