(4 Nov 2020) Security forces in Ivory Coast dispersed opposition supporters with tear gas as protesters erected barricades in another part of Abidjan on Tuesday after President Alassane Ouattara was declared the winner of a controversial third term.
Police disrupted a news conference by opposition leaders with international journalists on Tuesday afternoon. After ordering people to leave, the forces fired tear gas in the streets surrounding the press conference.
It was not known where the opposition leaders Pascal Affi N'Guessan and 86-year-old former President Henri Konan Bedie were on Tuesday evening.
The two opposition leaders had boycotted the election, in a bid to discredit the vote.
On Monday they had discounted Outtara's victory, saying the elections were not fair and that his mandate to lead Ivory Coast had now expired.
The electoral commission said early Tuesday that voter turnout was 53.9%, according to election officials, though the opposition has maintained only 10% of Ivorian voters took part.
Victory celebrations appeared muted, with only small crowds gathering in the pro-Ouattara neighborhoods of Abidjan. By late afternoon, young men had thrown wooden tables and other barricades into the streets of Abidjan's posh Cocody neighborhood as security forces stepped up their presence in the area because of the opposition meeting nearby.
Ouattara had been expected to easily win the election after the leading opposition figures called on their supporters to stay home.
According to official results released Tuesday, they received 0.99% and 1.66% of the votes, respectively. 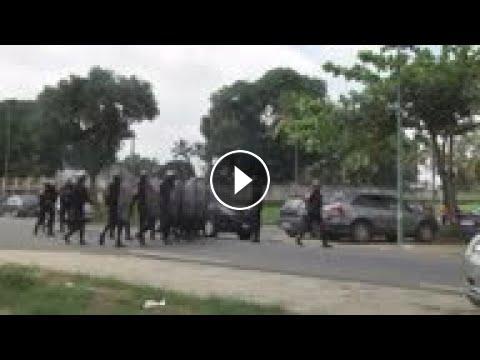