The Egyptian Museum in Cairo celebrates its 118th anniversary.

This year marks 118 years since the founding of the Egyptian Museum.
Inside its walls is the largest collection of ancient Egyptian artifacts, a reminder of the country's rich history.
Guests of the anniversary celebration, including the Egyptian minister of antiquities and tourism, Khaled El-Enany, and foreign ambassadors, took a tour inside the museum where two temporary exhibitions are being held.
The first is an exhibition of coffins, some of which are displayed for the first time.
And the second is of Egyptian artifacts, which were seized at the ports as they were on their way to be smuggled out of the country.
The Egyptian Museum was founded by Abbas II, Egypt's last Khedive (ruler).
It opened its doors to the public on 15 November 1902.
The museum building, designed by French architect Marcel Dourgnon, lies on the edge of Tahrir Square, the center of the 2011 uprising that toppled longtime autocrat Hosni Mubarak.
It houses the world's largest collection of pharaonic antiquities and has long been a cornerstone of Egypt's tourism industry. 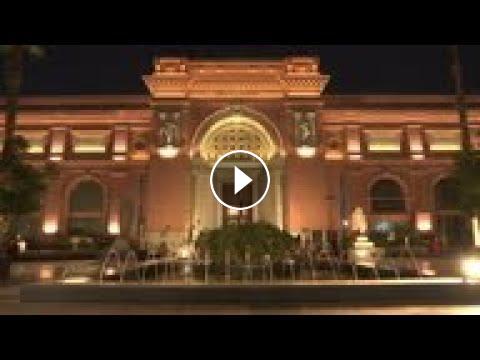