Trucks in long queues for diesel in oil-rich Libya

Trucks in Benghazi wait in long queues to obtain diesel amid a fuel crisis in oil-rich Libya.

STORY-LINE:
Tracks are standing idle in eastern Libya, waiting in long queues to obtain diesel as the oil-rich country faces a fuel crisis.
Diesel fuel pumps in Benghazi gas stations were shut on Saturday while the fuel is being sold at record prices in the black market.
Truck drivers said they are struggling to make ends meet amid the crisis.
"We, as ordinary citizens, are hurt by the diesel crisis, badly hurt," said truck driver Fathallah Al-Shiekhi.
Companies responsible for the fuel distribution said the reason of the crisis is the delay of the marine vessels, or tankers, as the oil refineries have stopped operating and fuel is being brought from outside the country.
These tankers "used to come on a monthly basis, every month separately," said Adel Bin Dardaf, the manager of the media office of Brega Petroleum Marketing Company, the state company responsible for fuel distributing in eastern Libya.
The scarcity of diesel fuel is also affecting electricity, as the country has been experiencing long periods of power cuts in recent months.
The General Authority for Electricity and Renewable Energy in Benghazi said in a statement on Saturday that the lack of diesel is the main reason for the long power cuts.
The power deficit reached about a thousand megawatts for the first time in years in the power grid of the eastern region.
Oil, the lifeline of Libya's economy, has long been a key factor in the civil war, as rival authorities jostle for control of oil fields and state revenue.
Libya has the ninth largest known oil reserves in the world and the largest oil reserves in Africa.

Trucks in long queues for diesel in oil-rich Libya 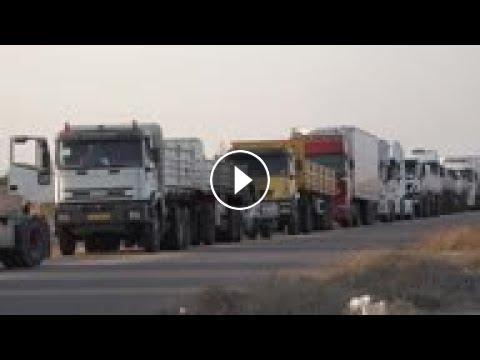 Trucks in Benghazi wait in long queues to obtain diesel amid a fuel crisis in oil-rich Libya.   STORY-LINE: Tracks are standing idle in eastern Libya,...