South Africa's president said on Monday that 13 South African soldiers were killed and 27 were wounded in fighting in the Central African Republic.
President Jacob Zuma also said that one soldier is missing.
"We have confirmed that 13 of our brave soldiers who were committed to fighting for peace and stability in Africa fell in Bangui," Zuma said.
South African troops came under attack on Saturday in the Central African Republic as rebels advanced on the capital, Bangui.
The rebels have overthrown the country's president and seized the presidential palace.
South Africa had deployed several hundred soldiers to the Central African Republic to assist national forces there.
"South Africa rejects any attempts to seize power by force and therefore will support sanctions and other measures against the perpetrators of any unconstitutional change of government," Zuma said.
A split in the leadership of the rebel coalition emerged on Monday.
One of the rebel leaders, Michel Djotodia, declared himself president and said he considers himself to be the new head of state.
But another rebel leader told reporters his group does not recognise Djotodia as president, and said they will challenge his attempt to install himself at the helm. 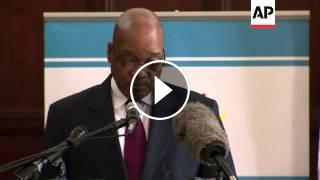 South Africa's president said on Monday that 13 South African soldiers were killed and 27 were wounded in fighting in the Central African Republic. Pr...