Mengistu Haile Mariam born 21 May 1937) is an Ethiopian soldier and politician who was the leader of Ethiopia from 1977 to 1991. He was the chairman of the Derg, the military junta that governed Ethiopia, from 1977–87, and the President of the People's Democratic Republic of Ethiopia (PDRE) from 1987–91.

The Derg took power in the Ethiopian Revolution following the overthrow of Emperor Haile Selassie I in 1974, marking the end of the Solomonic dynasty which had ruled Ethiopia since the 13th century. Mengistu purged rivals for power from the Derg and made himself Ethiopia's dictator, attempting to modernize Ethiopia's feudal economy through Marxist-Leninist-inspired policies such as nationalization and land redistribution. His bloody consolidation of power in 1977–78 is known as the Ethiopian Red Terror,[4] a brutal crackdown on opposition groups and civilians following a failed assassination attempt by the Ethiopian People's Revolutionary Party (EPRP) in September 1976, after they had ignored the Derg's invitation to join the union of socialist parties.

Internal rebellion and government repression characterized Mengistu's presidency, the Red Terror period being a battle for dominance between the Derg, the EPRP and their rivals the All-Ethiopia Socialist Movement, who had initially aligned themselves with the Derg. While this internal conflict was being fought Ethiopia was threatened by both Somali invasion and the guerilla campaign of the Eritrean People's Liberation Front who demanded independence for Eritrea, then a province of Ethiopia. The Ogaden War of 1977–78 over a disputed border region with Somalia was notable for the prominent role of Mengistu's Soviet and Cuban allies in securing an Ethiopian victory. The catastrophic famine of 1983–85 is what brought his government the most international attention.

Mengistu left for Zimbabwe in May 1991 after the PDRE National Assembly dissolved itself and called for a transitional government. His departure brought an abrupt end to the Ethiopian Civil War. Mengistu Haile Mariam still lives in Harare, Zimbabwe, and remains there despite an Ethiopian court verdict finding him guilty in absentia of genocide.[5] 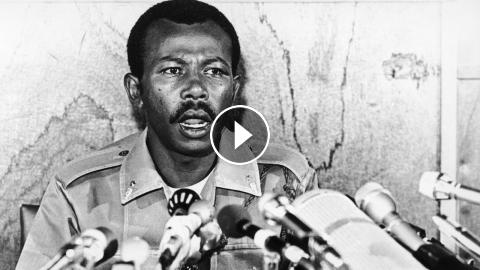