The Ivory Coast's two main opposition leaders who pose the most serious threat to incumbent President Alassane Ouattara on Thursday filed their candidacies for the country's upcoming October election.
Former president Henri Konan Bedie, who led the country from 1993-1999, will run for the Democratic Party of Côte d'Ivoire – African Democratic Rally (PDCI-RDA).
Pascal Affi N'Guessan will represent the Ivorian Popular Front, the party of ex-President Laurent Gbagbo, after the courts rejected a bid from Gbagbo to run again.
N'Guessan, a former prime minister and telecoms engineer, is running against Ouattara for a second time after losing to him in the 2015 presidential election.
Ouattara presented his own candidacy papers at the start of the week.
The two opposition leaders object to Ouattara's decision to run for a third term in the October elections, calling his candidacy unconstitutional.
Opposition parties have called on him to withdraw his candidacy.
Ouattara has been in power since 2010 and earlier this year promised not to run again.
However, the ruling party nominated him as its candidate after its previous nominee, Prime Minister Amadou Coulibaly, died in July from a heart attack.
Ouattara has said the death of the prime minister left a void and argued because changes were made to the constitution in 2016, the two-term limit does not apply to his previous terms.
The president's decision has revived political tensions in the West African nation, and at least six people have been killed and many others injured in violent protests since his announcement. 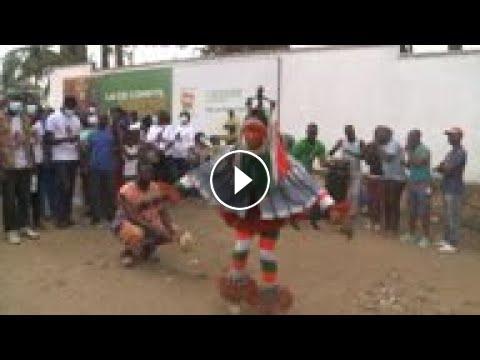 The Ivory Coast's two main opposition leaders who pose the most serious threat to incumbent President Alassane Ouattara on Thursday filed their candid...