Dispatches reveals how key politicians at the heart of the vicious fighting in Somalia - described as the world's worst humanitarian crisis - enjoy incredibly close links to Britain. They have British or EU passports, their families live here and they commute between Somalia and homes in English cities. British taxpayers are financing them in the name of democracy - yet in Somalia they are linked to allegations of mass murder, torture, extortion and corruption.

Reporter Aidan Hartley sets off on the trail of four senior figures in Somalia's Western-backed government - an investigation which takes him from Leicester and Birmingham to Mogadishu - a city so dangerous that he and director Jim Foster are the only Western journalists on the ground.

The leaders of the current government, installed 17 months ago when Ethiopian forces seized Mogadishu from Islamic militants, were expected to restore peace after years of civil war, but also to destroy Al Qaeda and its allies in the Horn of Africa. The investigation begins in Britain. Among the British-Somali community, Hartley finds anger and frustration that taxpayers are sponsoring politicians who they claim are ruling by the gun and profit from conflict. In Leicester, one British-Somali tells Hartley he was recently told to pay ransoms for the release of several relatives languishing in a dungeon controlled by a senior official in the Somali government who has a house in the same Leicester neighbourhood.

To find out more, Hartley and Foster travel to Mogadishu where they find a city descending into chaos and extreme violence. Vicious fighting between insurgents and the government forces has killed more than 7,000 civilians and produced the largest exodus from a capital city since Pol Pot's Cambodia. The immediate horrors of the fighting are captured on film when a roadside bomb hits a vehicle escorting the Dispatches team while they're driving in convoy with armed security guards, used to fend off kidnappers and bandits. Three people are killed and three others wounded. Attacks like this are a daily occurrence, together with indiscriminate artillery shelling, assassinations and street skirmishes.

Hartley investigates allegations that the government's National Security Agency (NSA), the counterpart to MI6 and the CIA in counter-terrorism operations, is operating with extreme methods. He hears first-hand claims of false imprisonment, torture and extortion from prisoners who are only freed when ransoms are paid.

Dispatches heads to the outskirts of Mogadishu where hundreds of thousands of terrified civilians from the city have fled to live in squalid camps. They live in huts of plastic and sticks among the sand dunes. They all rely on humanitarian aid from Britain and other donor countries, but they're already starving and falling sick.Hartley investigates why aid workers rarely set foot in Mogadishu and why the desperate victims of war are not receiving the food and medical aid they so badly need. And finally, the investigation examines claims of indiscriminate bombardment of civilian districts where insurgents are thought to live.

Back in the UK Hartley interviews Minister for Africa Lord Mark Malloch-Brown about British support for this Somali government that is presiding over the worst phase of conflict in 17 years of vicious civil war in Somalia. 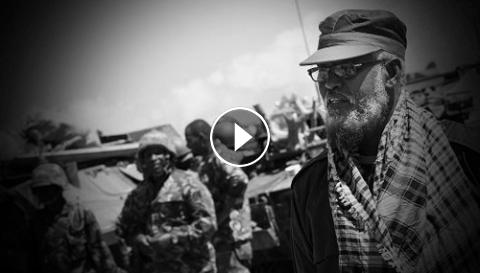 Dispatches reveals how key politicians at the heart of the vicious fighting in Somalia - described as the world's worst humanitarian crisis - enjoy in...